On August 5, 2019, New Delhi revoked Article 370 of Indian Constitution which enshrined the semi-autonomous status of Jammu and Kashmir. Following is a brief analysis of the changing realities on ground written by KO columnists.

ACCORDING to South Asia Terrorism Portal (SATP), 283 persons were killed in 2019, and there were 321 deaths in 2020 over 140 conflict-related incidents, including 33 civilians, 56 Indian security forces, and 232 militants. By mid-2021, 138 persons have been killed in 68 incidents, including 13 civilians, 20 Indian security forces personnel and 105 insurgents. Therefore, conflict-related deaths in Kashmir have remained at the 2016 level (i.e., above 200 deaths/year) even after August 5 abrogation. That means, a low-intensity armed conflict persists even when cataclysmic political changes have occurred in the background.

Violence across the Line of Control (LOC) also spiked after the abrogation of Article 370. According to the Armed Conflict Location and Event Data Project (ACLED), 2020 was “the most violent year for conflict between India and Pakistan.” Exchange of artillery fire continued throughout the year affecting civilian populations across the LOC. In February 2021, India’s Minister of State for Home said that in the cases of 5133 ceasefire violations by Pakistan, 22 civilians and 24 India security personnel were killed. Pakistan Foreign Office claimed 3012 ceasefire violations by India because of which, reportedly, 28 civilians were killed and further 253 were injured. These heightened border clashes further deteriorated India-Pakistan relations with both governments (in November and December, respectively) summoning the Charge d’Affaires of each other’s High Commissions to register protest over continuous ceasefire violations.

Violence on the LOC ended only after 25 February 2021, when the Director General Military Operations (DGMO) of India and Pakistan made a joint statement and agreed “for strict observance of all agreements, understandings and cease firing along the LoC and all other sectors, with effect from midnight 24/25 February 2021.”  Some analysts have attributed cessation of hostilities on the LOC to the pressures brought by the escalating military tensions between China and India along the 3,488 km poorly demarcated Line of Actual Control (LAC) that divides Chinese and Indian controlled territories in the Ladakh region.

China-India border showdown started on 5 May 2020 at Pangong Tso Lake in Ladakh, and escalated into a bloody clash on the night of 15-16 June in the Galwan Valley in which India lost 20 soldiers, while four Chinese soldiers were also killed and a regimental commander of PLA Xinjiang Military Command sustained serious head injury. Although on 11 February 2021 China and India announced disengagement from the friction points along the LAC, tensions remain.

Chinese military posturing at the LAC is believed to be the fallout of the August 5 decision wherein New Delhi had declared Ladakh (with pre-1947 borders) as a union territory. Chinese had objected strongly, with Foreign Ministry spokesperson Hua Chunying saying:

“China is always opposed to India’s inclusion of the Chinese territory in the western sector of the China-India boundary into its administrative jurisdiction. This firm and consistent position remains unchanged. Recently India has continued to undermine China’s territorial sovereignty by unilaterally changing its domestic law. Such practice is unacceptable and will not come into force.”

The border clashes forced massive troop deployments and relocations to the inhospitable terrains. India, effectively, faced a two-front confrontation with its nuclear-armed rivals, overstretching its troops. And, this is what Indian security establishment has always feared and wanted to avoid at all cost. Because, as Sushant Singh, a Senior Fellow at the Centre for Policy Research (New Delhi) argues, “India does not have the economic wherewithal to resource its military to fight a two-front war.” Reengaging with Pakistan in the backchannel talks which, reportedly, the United Arab Emirates facilitated, helped calm the rising military tensions. The February ceasefire was followed by the Prime Ministers of India and Pakistan exchanging letters, thus indicating thawing in the bilateral relationship. 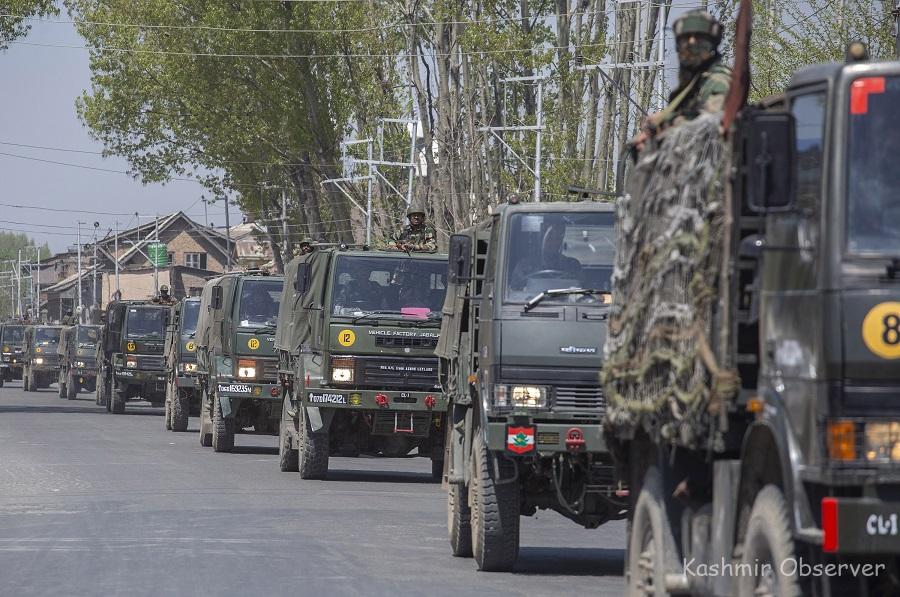 Very little that we thought and understood about Kashmir before August 5, 2019 applies now. And if we continue to look at the situation through the same prism, there’s no way we can understand what is happening in ‘Naya Kashmir’.The new Kashmir needs rethinking our decades old understandings and narratives to make a sense of it.

It is clear that the Modi government has changed the game in Kashmir internally and as a consequence externally too. A static thinking rooted in the early nineties will get us nowhere in sorting the fraught situation confronting us.

The choice for the mainstream leaders is stark: between being rejected by the centre in favour of the pliable alternatives or falling in line with its expectations. They have little space to fight back In the new scheme of things where the dissent has been made inherently infructuous and the resistance redundant. There is little that is happening  in terms of resistance in Kashmir that could bring the centre to terms or, at least, persuade it to engage with Kashmiris to dole out concessions.

Going forward, the current situation is likely to linger on for a while. There is little chance that the Assembly election will be held anytime soon. At least, not until the delimitation commission enhances the seats for Jammu making it politically at par with Kashmir. Until that time, the DDCs will serve as a replacement for the Assembly.

Similarly, the Centre is unlikely to restore the statehood of J&K. This also appears to be subservient to the completion of the delimitation exercise. The centre, as seems clear, doesn’t want its Article 370 decision to be in any way challenged by an Assembly dominated by the parties which have Kashmir as their core base. 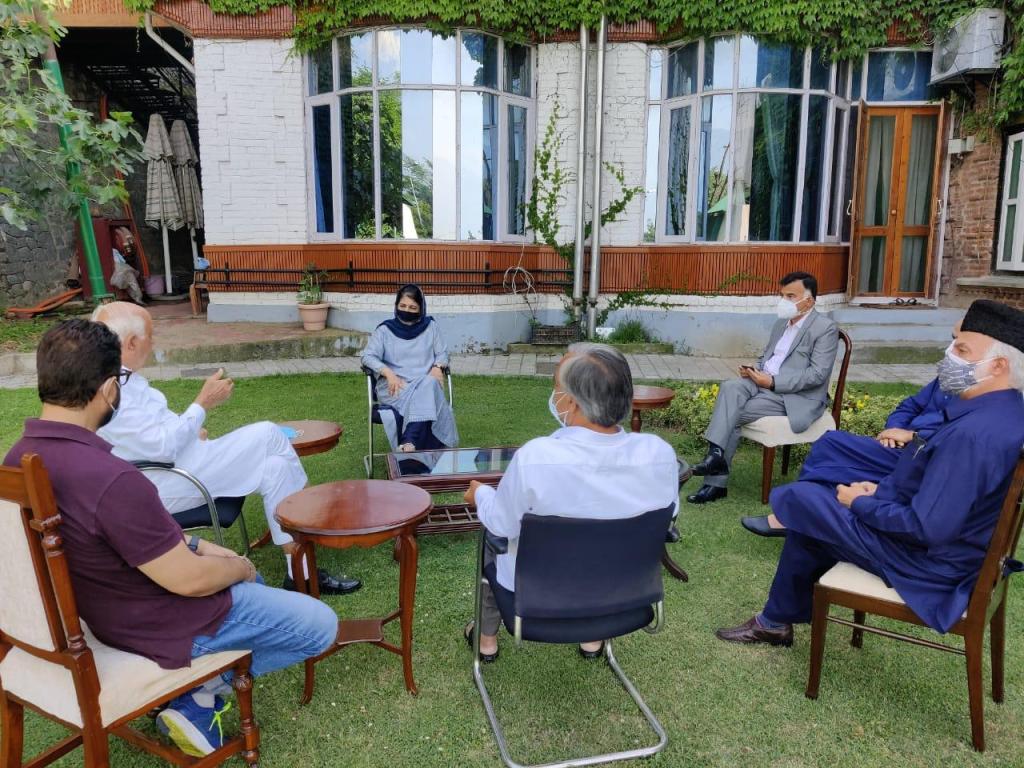 For the rest of the world the health and economic emergency witnessed is something which occurs once in a century. For J&K, the added prequel of August 2019 made the twin pandemic lock downs even more excruciating and absolutely unaffordable. Sustaining this shock without a magnanimous Govt. support is therefore beyond imagination. The Govt, both UT as well as the Union, therefore needs to come up with an immediate economic response which caters to the economically vulnerable sections, impoverished households and dying businesses of Jammu and Kashmir.

Businesses in J&K can no longer be rescued with meager support like credit facilities, interest remissions and moratoriums. That phase is long gone. It’s not a liquidity issue any longer. They are facing insolvency now. The inflexible debt contracts with banks on the other hand is a total mismatch with the volatile income shocks. The Government will have to come up with a major business revival response. The scale of expenditure might demand Govt approaching the union Govt for funds as well as issuing long term bonds in the markets. Taxes which the Govt. survival will only come if businesses survive, people find employment and the economy survives the shock of the century. Therefore rescuing businesses is a win-win situation for both the Govt as well as the people.

Another effective route of pushing low cost liquidity in the system to spur demand will be to pay three months salaries & pensions of the Govt. Employees in advance.

This is an extract from the author’s article,” Sustaining Lockdown 3.0” published on Kashmir Observer

Man Killed After Hit By Speedy Tractor In Kulgam